coinspeak July 3, 2019 Comments Off on The Twitter Killer 328 Views

There is a new app powered by Bitcoin SV. It’s called Twetch. This early stage app has the potential to be a Twitter killer.

To use Twetch you must have a moneybutton.com wallet linked. Once on Twetch every action has a microtransaction fee in BSV associated. This small fee pays for putting the information on the BSV blockchain and rewards the content producer. Content producers monetizing via microtransactions is an unsolved problem on today’s Internet. BSV changes the game.

Similar to Twetch, there is Bitstagram, a Bitcoin SV powered version of Instagram. When someone likes your post on Twetch or Bitstagram you, the content provider, get paid.

For writing articles there are BSV powered sites yours.org and https://www.bitpaste.app/. Goodbye Medium and other paid blogging sites. Writers can now blog direct to the blockchain and be paid in BSV.

Now, imagine this for music. There is going to be a tidal wave of migration to BSV for artists sick of large record companies owning their music catalog. There is already a site available: https://www.audiob.app/ Sample screenshot below of a micro 3 cent transaction for a music file. You can’t do this anywhere else! 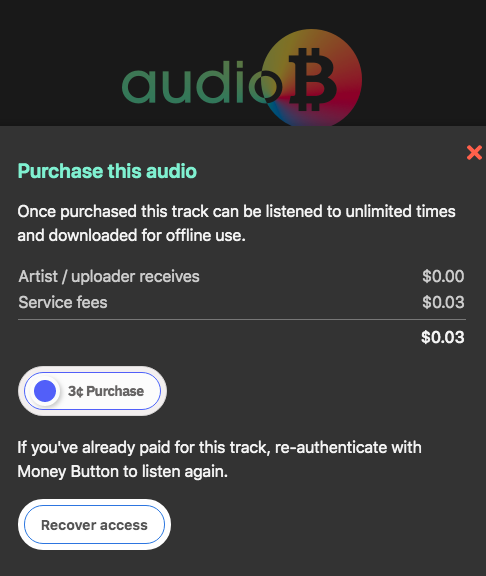 EDIT: Forgot to add https://streamanity.com/ as the BSV powered pay by time viewed replacement for YouTube.

These products are in early phase development. In the future I could see these platforms being customizable for content producers (and consumers). All censorship free, immutable and monetized. This a new economy, one that will dwarf the Internet explosion.

This will shift the game of social media owning your data and you being the product for advertisers, bots and phishing scams. Now you own the data and your puppy pictures pay you instead of Zuck.

There is a noticeable shift in BSV. Another development this week is a relatively unknown Crypto holder went to the Florida courtroom for the Kleiman vs Craig Wright hearing and reported about it on Twitter. At first he was anti BSV, but as he heard more he began to shift and the BTC army attacked him.

For the record, not paid.

This person’s tweets are now a public litmus test for what it is like for someone with a bit of notoriety to go against the tide of BTC towards BSV.

While all of these apps are early stage they point to a very exciting future for BSV. Social media is about to be shook.

People are waking up.

20 years as an IT consultant. Escaped the rat race in 2015. Addicted to travel and tacos.
@coinspeak_io
Previous The Twitter Killer
Next The Bitcoin Economy Part 1