This is your Final Warning

Bitcoin is ready to explode. This is your last chance to get on board before we visit $1,000 and beyond.

This vid starts with an ex FB exec redpilling the audience with Bitcoin. Then we have Richard Branson and a few other folks talk about Bitcoin. 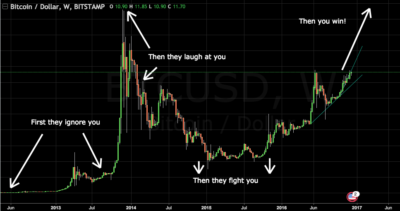 U.S. markets are at the effect of central bankers desperately easing to keep the public placated and it’s worked with market ATH but it hasn’t solved anything. When all else has failed CB have resorted to BTFD. Everything from the central bankers is fake news, designed to keep those in power atop the heap. Employment, inflation, GDP…all fake to promote a message with an agenda that the sheeple are OK. In reality, trillions are given to banks making every one of your dollars worth less.

Tbe banks are backstopped by the government. Imagine the horrible decisions you’d make if you knew there were NO consequences. You won’t go to jail, in fact, you’ll likely be richer! Combine that environment with ample cocaine use and you have our current situation.

The graft perpetrated on the public by banks and governments is coming to an end. Those market ATH will not be sustainable and it’s a long way down. Best case scenario, there is a heavy rotation into infrastructure under #MAGA. However, MAGA will only make a new bubble and it’s net output depends on taxes. MAGA is not salvation, only another mirage.

How long have we been collectively waiting for the shoe to drop in the market? Fuck the market. At a minimum, put some of your funds into Bitcoin. Make Bitcoin your smallest allocation. Or fucking kick yourself next year for not buying cheap insurance when Bitcoin moons and the market implodes.

Bitcoin ATH is a measly ~$12B market cap. $12B is PEANUTS in the financial world. The upside is ridiculously huge. Do you realize our monetary system stopped evolving in the tech equivalent of the pony express. Try to send a wire recently? It takes days and costs $50! It’s ridiculous. Bitcoin is about as easy as sending an email and just as fast. Western Union $WU has a market cap equal to Bitcoin. Bitcoin can easily grow 10x from where it stands today.

Here’s the true value though. Bitcoin is an immutable ledger immune to government influence. A transaction on the blockchain costs pennies, can move millions and no third party is necessary. Think about the impact of that. No 3rd party is necessary. Banks and governments can’t stop Bitcoin. Banks are powerless to insert their tentacles and siphon from the public. Money for the people, by the people.

Bitcoin and blockchain are the biggest technical and financial developments in our lifetimes. It’s a revolution in how we transact value globally. Are you going to pass up profiting from it?

20 years as an IT consultant. Escaped the rat race in 2015. Addicted to travel and tacos.
@coinspeak_io
Previous Money has nowhere to hide
Next New Year, New Market Cap High in Bitcoin