Putting a target on anything is a fool’s game. Well, I’m your Huckleberry. 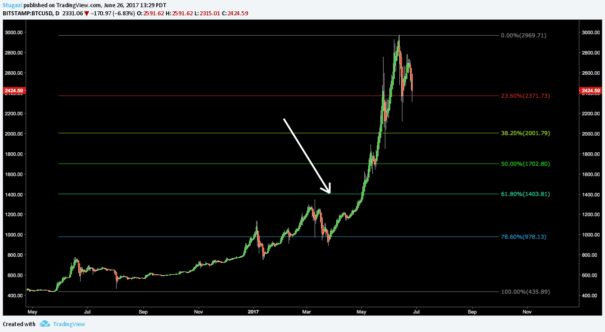 However, much like baseball, there’s no crying in Bitcoin.

You either believe Bitcoin is a game changer or you don’t. Buy hold or sell. Those are your choices.

Am I concerned? Sure. And yet I know Bitcoin has been here before many times. The global macro economic situation remains bullish for Bitcoin. Japan has made Bitcoin a currency. India is warming up to Bitcoin. Bitcoin is a GLOBAL phenomenon. There will be bumps in the road to world domination.

The Bitcoin bulls are like early bulls in any sector. Ridiculed and sometimes publicly humiliated. But in the end Bitcoin will prevail. Even if you aren’t a believer can you afford to sit out a game changing financial instrument with zero exposure in your portfolio?

These are your future masters of finance. Prepare accordingly.

20 years as an IT consultant. Escaped the rat race in 2015. Addicted to travel and tacos.
@coinspeak_io
Previous Dennis Rodman saves the World (sponsored by PotCoin)
Next Rally caps on: Bitcoin correction is OVER