Tethers are a Cryptocurrency that are designed to be pegged to the USD. They are created out of thin air (sound familiar to USD) and mostly used on the Bitfinex exchange. Issuing a currency pegged to the USD from nothing is a very dangerous game. From the Tether website:

Tether converts cash into digital currency, to anchor or tether the value to the price of national currencies like the US dollar, the Euro, and the Yen.

On certain exchanges you can’t sell for USD. You can only sell for Tehters which are ticker USDT. Since Tethers are supposedly pegged to USD the assumption is Tethers are as good and safe as dollars. Surprise, they very likely are not!

There is a dedicated twitter account that has been warning about the influence of Tethers on Bitcoin price for months. Bitfinex has started legal proceedings against this individual. I’m not clear what they are charging him with but he’s a thorn in their side. This person has been closely tracking the correlation to when new Tethers are issued to moves in Bitcoin price. 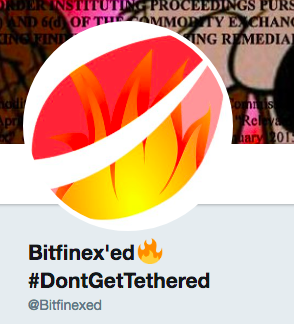 Today there is an article about a subtle change in a popular Bitfinex employee Twitter profile.

A pseudo-anonymous individual going by the nickname of Bitfinexed noticed that a symbol used to indicate that someone has been silenced by simply no longer showing the symbol (warrant canary) was today no longer showing for Ellis.

This symbol is often used to say, while not saying, that something has happened, gaining prominence after it came to light NSA uses gag orders. 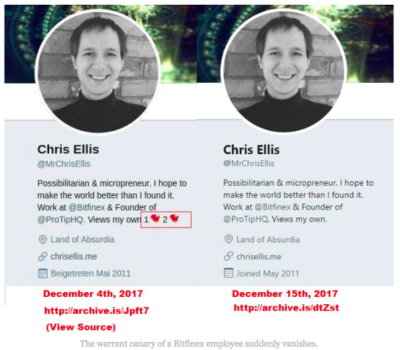 While this proves nothing it’s an interesting development in a story that’s been ongoing. This individual has not tweeted since his the canary disappeared from his Twitter profile.

Is there merit in the structural problems of Tethers? Keep in mind that Bitfinex was hacked earlier this year. Were Tethers used to keep them afloat and have they further abused them? No one knows yet.

This is a potentially explosive story if it’s true. Also remember that CBOE opens trading on Bitcoin this week AND Bitcoin has another difficulty adjustment in <3 days. The out of control fees will be going higher.

I remain irresponsibly allocated in Bitcoin Cash (see below for main reason). I have a small position in EOS and will rebuild a position in XMR when an opportunity arises. I am braced for mass fuckery and can survive a zombie apocalypse style dip in Crypto. Can you?

The two coins with bigger market cap than $BCH do not work as currencies. pic.twitter.com/RS4LyLiBR3

20 years as an IT consultant. Escaped the rat race in 2015. Addicted to travel and tacos.
@coinspeak_io
Previous Litecoin flexing, Bitcoin stalling
Next Crypto Is Dead, Long Live Crypto