On Second Thought, FUCK OFF

Good Thursday to you all, even the haters.

As a follow up to Allow Myself to Defend Myself….

This is another BSV focused Op-Ed. Please direct all complaints to flybroker AT gmail dot com

Today I have been introduced to yet another peak at the future running exclusively on BSV. It’s called baemail and it’s a BSV web email client that inscribes emails on the BSV blockchain for a fee. 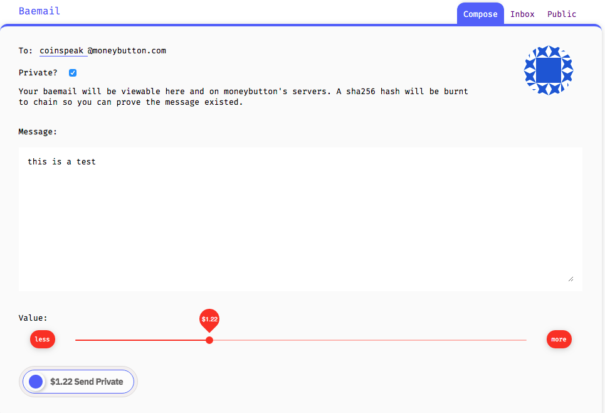 I’m not going to describe the screenshot, should be self explanatory. A few years ago a company called 21co attempted a similar project and was blessed immediately with a huge valuation. Their promise was to protect your email inbox from spam by requiring others to pay small fees to email you. Less than a year later they completely changed their business plan to be earn.com and sold their user’s emails database to the highest bidder (That last part may not be true, just my assumption based on their about face and money problems). But I digress.

What do I think of baemail? I think it’s basic. Has no chance of massive adoption. Likely to fail. That’s not what’s important here. Follow along.

Another interesting project: weiblock.app This is the Chinese clone of twetch.app. Basically a Twitter clone where every action is a microtransaction on BSV. A BSV powered social media platform focused on Chinese market is pretty huge. In all likelihood it will fail but the lessons here are important.

You have to have perspective. These are exciting times.

Over time the more of these projects the better. Iterations are key. Look at how many dotcoms failed. Most of them.

The dotcoms that succeeded have made the Internet the behemoth that it is today.

BSV is the future. Weiblock, Twetch, Paymail, Moneybutton etc are all in the infancy stage of the next generation Internet.

It’s called MetaNet and within a few years businesses will be adapting to run on top of MetaNet. MetaNet runs on top of BSV.

Also, FYI, I am from the fucking future.

20 years as an IT consultant. Escaped the rat race in 2015. Addicted to travel and tacos.
@coinspeak_io
Previous Allow myself to…..defend…myself
Next Kleiman v Wright for $5 Billion