Let’s take a look at some data about BTC and BSV. I have no doubt my new favorite commenters will counter this info with their own charts. Let the games begin.

BSV can do everything BTC can do and more yet it’s 825 times more expensive to transact on BTC. This is why products like Twetch are being created. Less than a penny fees are necessary for microtransactions. With BTC fees between 30 cents and a dollar it’s cheaper to use a credit card in most cases. BTC brings no unique utility as peer to peer cash. So the narrative shifts to Store of Value, but with near zero utility! Also a laughable premise. BTC fails when objectively compared to BSV. It’s been consistently cheaper to transact on BSV by 100x or more since the beginning. 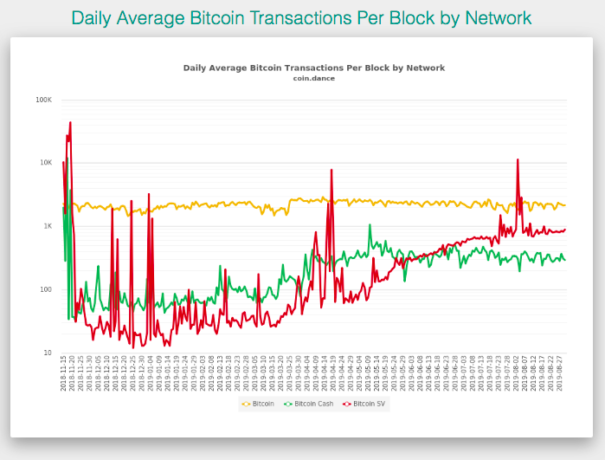 BSV is in red and BTC is in yellow. BTC capped at 1MB so nearly a flatline in transactions. Daily transactions increasing over time with peaks during stress tests above BTC. You’ll notice BTC is practically a flatline. When there is a spike in BTC transactions fees skyrocket as people compete to put their transactions towards the front of the line. It’s like yelling fire in a crowded theater. Some people are going to get burned having to wait hours or pay higher fees. BTC is digging it’s own hole. The 1MB blocksize limit is a cap on transactions per block. BSV will be passing BTC in transactions by 2020.

Blocksize chart, again BSV in red. This is an exponential chart so that spike at the beginning is a 10x difference. Again, BTC is limited to 1MB blocks. BSV has mined blocks over 200MB and is scaling towards 2GB and then unlimited. It would take BTC ~33 hours to mine the 200MB of transactions BSV mined in ~10 minutes.

Scaling is the only way Bitcoin can work for the world. It’s an inconvenient truth for BTC their scaling plans are garbage and the Core devs have no real interest in scaling because it threatens their Blockstream products. Note the name of the Blockstream whitepaper: https://www.blockstream.com/sidechains.pdf    SIDECHAINS. Blockstream, which controls BTC, has no interest in BTC utility improving as it damages their potential revenue from Blockstream products.

Here’s the Blockstream CEO suggesting those who want to use Bitcoin open a tab instead. LMAO you can’t make this shit up.

Name branding is a powerful thing. During all these forks the name “Bitcoin” followed the coin with the highest price. There’s been years of pure shit to deal with in the battle for the Bitcoin name ever since. Few can understand the technical differences between coins. This is why I post to iBC, to blow up the bullshit about BTC having anything to do with Bitcoin. The campaign to discredit anyone who threatens BTC has been going for years. It’s a lesson in social media manipulation. BTC trolls are loud and numerous. Looks like we may have a few of them on iBC now. Hi guys! =)

Here’s a Daily BSVBTC chart. Yes, BSV is 1.3% the price of BTC. Incredible stuff given the charts above. This is the opportunity I’ve been pointing to for nearly a year. BSV works and is cheap AF. Do you know when the opportunity of a lifetime is no longer an opportunity of a lifetime? When the masses start to see what you see. You have to be willing to put yourself out there. I’ve done my homework and you know where I stand.

While I don’t put much faith in short term charts in this market I will point out that the judge’s unflattering statements about Craig Wright had very little impact on BSV price. BSV is not Craig Wright and vice versa. He is influential yes and a major whale holder but the technology matters more. Very bad news for Craig Wright doesn’t mean bad news for BSV. Let the haters hate.

Ichimoku cloud shows a positive TK crossover below cloud while cloud is narrowing. Still a bearish trend but pointing towards a possible reversal. A TK crossover failed recently in late June. All in all, I think all coins stumble into January 2020.

I don’t put much faith in TA for coins at the moment. There is so much FUD and misallocation of capital in coins it’s silly to point to a single chart and draw any conclusions. I think for now fundamentals matter more than anything. We are in that phase of the market where the hype has died and people start to look everything rationally. However, I’ve covered some fundamentals and snapshot of TA for your iBC pleasures.

I posted the tweet below in late 2017 when exuberance was ramping daily.

Given I posted this chart at the peak of BTC I think you could say I have an idea of how this market works.

$BTC double topped near it's 4.618 trend fib going back to ~$750. This can be a difficult fib to break / turning point in a single trend. If BTC breaks higher it's starting a new trend IMHO. pic.twitter.com/BMINN6KhxA

With that said, yes BSV is only 1.3% the price of BTC. It’s incredible given the functionality of the two coins, their current capabilities and the roadmaps. This is an opportunity. Even if you own BTC you could trade 1.3% of your BTC to have a 1:1 hedge. You’re crazy not to do that.

You can take my posts as the rantings of a BSV fanatic. Maybe. I do my best to eliminate bias and I reset and reevaluate often. Every time I come back to BSV. It’s BSV or bust.

20 years as an IT consultant. Escaped the rat race in 2015. Addicted to travel and tacos.
@coinspeak_io
Previous Kleiman v Wright for $5 Billion
Next Bitcoin is Smart Money