On June 29th I wrote about The Crypto Stock that’s better than GBTC. MGTI is up 189% since that post.

Why? Well, it may be related to these tweets. On July 18th John tweeted that Bitcoin would be $500,000 in three years.

Bitcoub's low of $1,800+ yesterday simply could not be maintained. In the long term Bitcoin moves above $500,000 within three years. Bets?

When someone replied they would bet him here was John’s response:

if not, I will eat my dick on national television.

And here is MGTI’s chart since that tweet. This shows the market likes a committed CEO! You don’t hear about Elon putting his dick on the line do you? Forget getting an MBA, swing your dick around the boardroom and see your company reap the rewards. 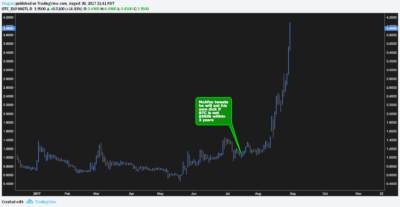 Elon Musk has nothing on John McAfee.

If you want to make money in a gold rush sell shovels.

20 years as an IT consultant. Escaped the rat race in 2015. Addicted to travel and tacos.
@coinspeak_io
Previous Bought some Alt Coins here
Next CALM YOUR TITS, BITCOIN IS FINE